A controversial South African fake news site that has gained significant traction over recent months has been traced back to a man from Mpumalanga who previously ran afoul of the law because of fake news.

These sites publish blatantly fake articles, employing controversial clickbait headlines. These headlines focus on inept black government officials, gory stories of the retaliation of crime victims against their attackers, and statements by politicians that are ludicrously absurd.

The NewsUpdatesSA site surged on social media in recent weeks as several community groups shared its articles on their social media pages. Judging by the responses on these posts, most readers were naïve enough to believe the fake news concocted by Msibi’s website.

Msibi was previously implicated in disseminating fake news during the 2016 municipal elections. A website registered under his name, www.africannewupsdate.com (AfricaNewsUpdates), claimed that two officials had been arrested in Thembisa with more than 80 000 ballot papers pre-filled with votes for the African National Congress (ANC). The fake article see-sawed between an ANC plot to cook the elections, or a smear campaign by opposition parties by “planting” the votes. 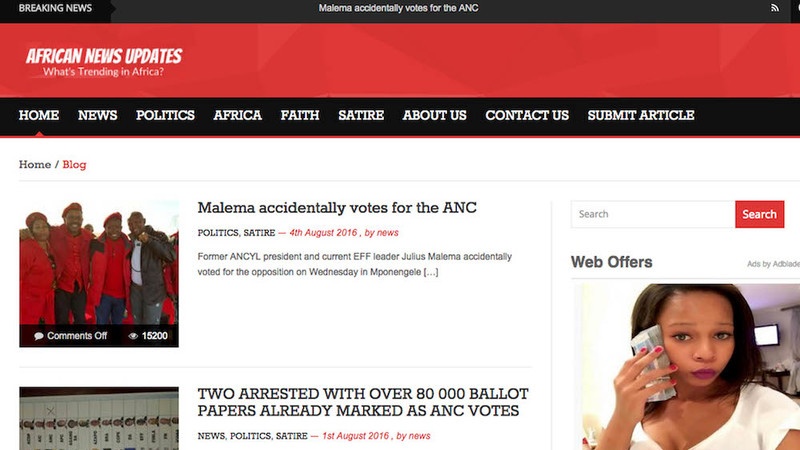 At the time, the South African Police Service (SAPS) and the Electoral Commission of South Africa (IEC) denied any such arrests had taken place, as alleged in the article. The IEC lodged a criminal complaint against the website owners, as the fake claims amounted to a breach of the Municipal Electoral Act. A 10-year prison sentence can be imposed for publishing false information that may create hostility or fear in order to influence the conduct or outcome of an election.

Despite repeated requests, the IEC did not respond to questions on the status of the case against Msibi. The Mpumalanga police have also not responded to requests for comment.

The website’s articles are plagiarised from stories published by credible news vendors, with minor alterations to the copy. The anonymous author often adds a few lines of their own to an existing story, to add additional controversy to an article. The headlines are then sensationalised to the extreme, often with no bearing on the content of the fake article.

The disconnect between the content of the stories and the sensational headlines is a fact unfortunately missed by the bulk of the people sharing these articles. It appeared most did not even read the article and those who did, showed little comprehension of its content.

Three examples of the insidious nature of these fake stories stand out.

“We want police stations to close at six o’clock in the evening for security reasons. Criminals in this country have become too dangerous’, Captain Derick Sithole.”

On July 4, 2018, the website published this headline, attributed to the fictitious “Captain Derick Sithole”.

The post was a hit: at the time of publishing, the Facebook post linked to the article was shared more than 13 000 times, netting itself 2 400 likes and more than 1 500 comments expressing a mixture of shock, incredulity and outrage.

The article was even retweeted by Martin Bosma, a Dutch politician and former journalist serving as a house representative for the Party for Freedom in the Netherlands. Bosma hastily deleted his retweet of the article after its dubious authenticity was pointed out to him by journalist and fellow countryman, Peter Burger. Ironically, Bosma’s portfolios focus on higher education, mass media and culture.

Burger, an investigative journalist and fact-checker for www.niewscheckers.nl , alerted Bosma to the fact that the statement attributed to Captain Derick Sithole was copied from a statement made by Captain Eddie Hall in 2017. He linked two screenshots to his tweet, pointing out the identical statements.

Locally, a Twitter user from the Western Cape, eager to prove the false claims, earned the ire of his local policing forum when he inadvertently shared the cellphone number of one of the officers at the station. A defiant @wcpretorius shared a screenshot of his conversation with the officer as “proof” that the fake news story was true.

This was only a half truth though: the Western Cape media centre’s Captain Malcolm Pojie, in response to the tweets by @wcpretorius, confirmed that the article was both fake and malicious, and that the closure of the satellite stations had nothing to do with the safety of officers stationed there.

An investigation into the article’s content revealed that it was plagiarised from three Times Live articles published between October and November 2017. The original articles reported on an escalation of crime in the Witbank area, attributed to the positioning of the town along a major highway, which made it a “hit-and-run” crime hotspot. No mention is made of the SAPS or the closing of its offices at 18h00 in the article.

Witbank is incidentally also the address Msibi used to register the website.

“Our forefathers wore animal skins because South Africa was not this cold. But whites came with their gadgets and now we have these cold fronts’, Says Minister of Department of Agriculture, Forestry and Fisheries.”

The second example was published by the site on July 8, 2018. It quotes “Daff”(sic) director-general Michael Mlengana alongside a picture of the minister, Senzeni Zokwana.

The fake article boasted 1 600 likes and 5 300 shares. In one instance, a Facebook user shared the article on “Eks van Montana en Omliggende Gebiede”, a community Facebook group based in the north-western suburbs of Pretoria. Members of the 50 000-strong group shared the article nearly 100 times, despite constant indications from some members that the article was clearly fake news.

The person who posted it defended his post by insulting those who pointed out the article was fake.

Both the content of the article, and the picture used, were taken from an Independent Online article dated June 20, 2018, dealing mostly with the effects of climate change. The fake comments attributed to Zokwana were injected into the article after it had been copied.

Khaye Nkwanyana, spokesperson for Zokwana, responded to the claims.

“We noted the fakes news reports on claims attributed to Minister Zokwana. We confirm as fake and our IT unit is busy tracking the source of this generation of fake news. This is the second of its kind in two months. We are trying to establish the political motive behind this.”

“South Africa will save a lot of water because of the cold front. People use less water when its cold, some people don’t touch water at all when it’s cold’, Minister of Water and Sanitation, Gugile Nkwinti says”

The third example was posted on the site on July 4, 2018. Despite receiving less shares on social media than the other fake stories, it still racked up nearly 1 000 shares on Facebook.

Similar to the story quoting Zokwana, the NewsUpdatesSA article added two lines of its own, claiming that Minister of Water and Sanitation “Nkweti” (sic) had stated that the colder weather would reduce water demand across South Africa, since fewer South Africans would want to bath or shower in the inclement weather.

“Nkweti (sic) also says ‘South Africa will save a lot of water because of the cold front. People use less water when it is cold, some people don’t touch water at all when it’s cold”.

Of course, Minister Gugile Nkwinti said no such thing.

This story was plagiarised from a piece by News24 journalist Iavan Pijoos.

Pijoos’ article dealt with the closure of roads across the country, because of snowfall coinciding with a cold front late in June 2018. Broad swathes of Pijoos’ article were copied verbatim, with spurious paragraphs added to create additional controversy.

But a scour through the source code of the website revealed its Google Analytics ID, a unique identifier used to track the flow of traffic to a website. A simple Google search identified that the same Google Analytics ID (UA-44654799) was used by Msibi’s previous website, AfricaNewsUpdates. 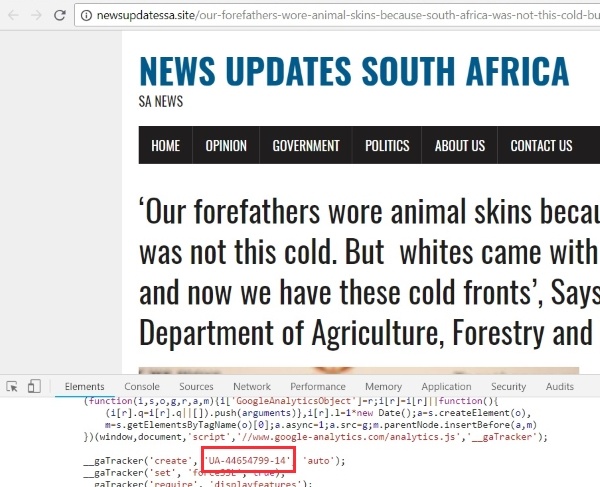 As further confirmation of the links between these sites, one of the webpage elements on NewsUpdatesSA still referenced the NationalNewsBulletin website in its HTTP requests. This is comparable to having a package delivered to the wrong address because you forgot to change your address on the site when you moved home.

Website registration records for the linked sites reveal that NationalNewsBulletin was registered to an owner calling itself African News Updates, and that the registrant used the email msi60325@gmail.com. The same email address was also used to register thenewyork-post.com, an obviously fake take on The New York Post. It was also established that Msibi registered at least two websites in 2016 using a PriceWaterhouseCoopers (PwC) email address. 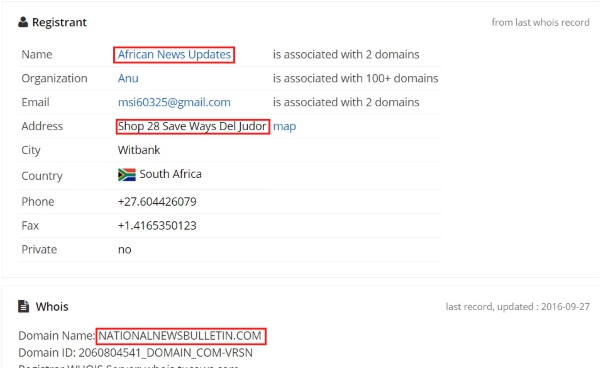 The various email addresses, the physical address, website names and website information neatly point to Msibi as the central figure involved in all the websites.

News24 also contacted PwC in respect of the use of their email in creating some of these sites.

“We have investigated the matter internally and established that Thulani Msibi was a junior employee in the firm’s information technology department. He was employed in our eMalahleni office and left the firm on November 30, 2016,” Fulvio Tonelli, chief operating officer for PwC Africa, told News24.

“The conduct you describe would constitute a serious breach of the firm’s policies and procedures and would always lead to disciplinary proceedings being instituted against the individual concerned. Since Thulani is no longer employed with us, the option to take action against him is therefore no longer available to PwC. The views expressed and information contained on the websites you shared with us does certainly not represent PwC’s views or values in any shape or form.”

Msibi was requested to provide comment at both the msi60325@gmail.com address, as well as a PwC email address indicated on the website registration records. He has not responded to repeated requests for comment.